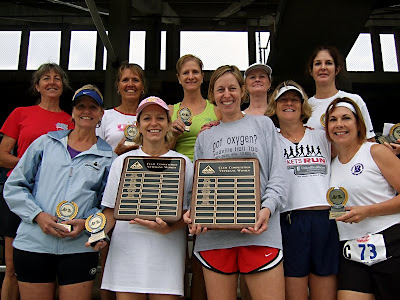 For the first time BCRR Veteran Women won BOTH Team and Club Competition Awards for the HARRA Fall Series! Awards were presented by HARRA at the Bayou Bash Relay in which BCRR Vet women teams also took 1st, 2nd and 4th place in their division - Sweet!

For those unfamiliar with the HARRA Interclub Competition , the "Team" competition is based on the top age-graded performance for the top scoring team (3 people/team) for each category for each race. The "Club" award is based on performance and participation as it scores for each team. (See Harra Rules - Bob Brown wrote a detailed explanation in the October 07 newsletter). Thus even if a Vet woman ran only one HARRA race in the fall series, she contributed to the Club award. Every person counts!!

Two Bayou City Road Runners were among the top ten Houstonian finishers at the 2008 Boston Marathon, as reported by Jon Walk in the RunHouston Blog (Houston Chronicle 4/21/08):

Congratulations!!
Posted by Kathi Mahon at 9:27 PM No comments: