Thanks to Roger Redding and Tina Reynolds for sponsoring the tab at Valhalla on Wednesday. This Wednesday we will not be meeting since Valhalla will be closed for Christmas.

Read more »
Posted by Kathi Mahon at 1:51 PM No comments: 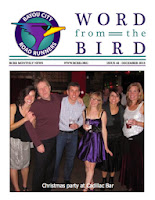 The December 2013 Edition of the BCRR newsletter has just been released and can be viewed on the BCRR Facebook page and on our website.

Want to have some input on the proposed upgrades to the Memorial Park running trail?  The Memorial Park Conservancy will host their second meeting  at 6:30 on December 10th at St. Theresa Church Hall, 6622 Haskell Street.  This meeting will include a short presentation on the ecology of the Park and will be followed by a facilitated group discussion.

They are also looking for park users to take part in an online survey on their website Memorial Park Tomorrow:  www.memorialparkmasterplan.mindmixer.com

*******
We had about 75 BCRR members and guests attend the BCRR Christmas Party at the Cadillac Bar and Grill on Sunday night.  The scrabble game was lots of fun and we also managed to raise approximately $150 for a cash donation to the Houston Food Bank.   Many door prizes were awarded and the dancing went on late into the evening.  The board would like to thank Susan Cita for making most of the arrangements.

Read more »
Posted by Kathi Mahon at 2:53 PM No comments: