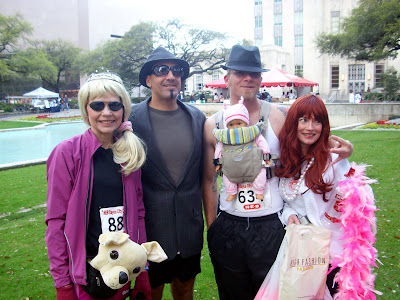 Paris, Adnan, K-Fed and Lindsay chill after the race 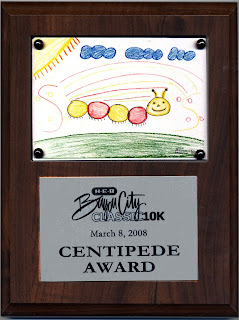 We had a blast this last Saturday running as a “centipede” in the Bayou City Classic 10K. Our theme was “Hollywood Divas Gone Bad: Running for (to/from) Rehab”. Our “segments” included Lara Allen as Lindsay Lohan, Donna Whitney as Paris Hilton, Kathi Mahon as Britney Spears, Jeff Tabourne as Brit’s paparazzo boyfriend Adnan Ghalib, Eric Faria as a paparazzo, and Rosie Schmandt as a rehab health care professional. We all had our costumes and props (for example, Lindsay with her vodka bottle and Paris with her purse Chihuahua). However, new BCRR member Clayton Smith was the real crowd pleaser as Britney’s ex K-Fed, complete with wife-beater T-shirt, tattoos, and baby strapped to his chest. He looked so convincing that many people mistakenly thought he was running with an actual live baby!

Our run went smoothly in spite of a few stops for “costume readjustments”. Those of us with wigs had special challenges and some of the men wearing suit coats got a little hot towards the end of the race. We weren’t the fastest, but we weren’t the slowest either. There was no chance of catching the BARC Yodelers or the Tornado Wild Animals, so we made it our informal goal to beat the centipede of Cows-with-floppy-ears (which we later found out were supposed to be “Dalmatians”), but after K-Fed taunted the “Team on Steroids” for being slow, we HAD to finish before them!! As we approached the finish line, the Blues Brothers-like Band was singing the George Thorogood classic, “One Bourbon, One Scotch, One Beer”. How perfect – they were playing our song!!!

In the end, we won an award for “Best Hair”, but we know in our hearts that we were the best from heads to toe!!
Posted by Kathi Mahon at 3:53 PM