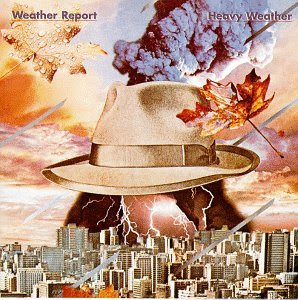 For those old enough, Heavy Weather was the name of a great jazz fusion album released in the late 1970s, by a group called Weather Report.  I highly recommend that everyone listen to it sometime.  Plus, isn't the album cover cool?
I was reminded of heavy weather when I walked over to the starting line of the Bayou City Classic 10K.   There was no one at the starting line ten minutes before the scheduled start. Everyone was huddled near the building to get protected from the wind.
Yeah, it was windy and it was a bit cold, but what have we become!  It was 43 degF and we acted like we were going to be running on the frozen tundra close to where Rosie Schmandt is from.
I'm just as guilty. I huddled around the heater and I shielded myself from the wind.   I must be getting soft.  I grew up in Kansas and lived in Chicago and New York!  I did a little bit of research and found there have been several races throughout the country this year run in much more adverse conditions. Here are a couple:
Feb. 1  Boston  Super Sunday 5K/10K- 1250 finishers, temperature 26 degF
Jan. 25  Kansas City, Children's TLC Groundhog Run 5k/10K, 2500 finishers, 15 degF
There are several other smaller runs, but it is hard for me to imagine showing up an hour early for either race and waiting in the cold.
The waiting in the cold and wind is the worst part of the race.  Today, it was a relief to get started and once we started and got out of downtown, we had very good race conditions.   A lot of people I talked to had very good times.  This was my second 10K in two weeks and it is a distance that I love to hate.  There is a definite mental aspect to this distance especially at the end that different from a 5K.  The 10K is more of a thinking person's race. By the way, I hate to disappoint some of you who were particularly pleased with your time, but the 'official' results are at least ten seconds too fast!
Congratulations to the BCRR centipede "Octo-mom" team who won an award with a very creative and topical theme.  Of course, the post race party was wonderful.  Thank you to John Phillips for providing the propane heaters and thank your to HARRA for again sponsoring a memorable race.
Posted by Bob Brown at 4:43 PM