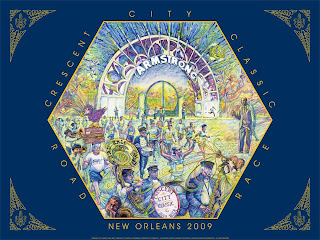 I have travelled to many places throughout the world and I learned very early in my career that things are not always as efficient as they are in the US.  As a stickler for punctually, I was horrified when my colleagues in places like Indonesia or the Philippines would escort me to a meeting 45-60 minutes late.  After a while, I realized that it wasn't a big deal to customers or anyone else that the meeting started late.  After understanding that, I was much more relaxed when visiting customers outside the US and enjoyed my trips much more.
There is an analogy here to Houston runners participating in the Crescent City Classic in New Orleans. If you demand the precise efficiency we regularly experience in Houston, you will be disappointed.  You can let that bother you or you can go with the flow. I recommend the latter. With that said, the organization is not very good and can be frustrating especially to first time runners.   Consider package pick-up.  There are 20,000 runners, about the same number who run the Houston marathon and half marathon.  Picking up a race package in Houston takes three minutes.  In New Orleans, it is bit more of an adventure.
If you had a print-out with your race number and name on it, you could proceed to the line.
If you just wrote-down your number or did not know it, you had to wait in a very long line to be told what your race number is.
Once you got to the front of the line, the volunteer hand wrote your name and number on a scrap of paper. Once you had the paper, you could proceed to another line to pick up your number.
Getting your number was only a start:
If you are seeded runner (red bib), you get a chip, but you had to pick up your chip inside the expo. It really wasn't that difficult.
If you are a fast runner but were not seeded (blue bib) (you had to provide documentation to be seeded), you could buy a chip for $5, and that required waiting in another long line.
Theoretically anyone could buy a chip, but when Lana Moody wanted to buy a chip as a non-seeded runner (orange bib), she was told they were out of chips for orange bibs. Who knew there were different chips.
Once you bought a chip, you had to take another piece of paper to the chip table and wait in line again.
This process is usually easier to stomach because there is Abita Amber and Abita Lite beer freely flowing.  However, when we were there, they had run out of beer.  Fortunately, more beer eventually arrived.
It's just best to relax and let the process work.   The race itself went off fairly smoothly.  The corral system was fairly smooth.  The course is flat with minimal turns so the times are fairly fast.  The winning time was 28:18!  It was a warm morning and I felt the heat at the end.  This is probably the warmest race condition I have run this season.
About 3 1/2 miles into the race, I realized how hard it is to run a 10K.   I also think the fear of being passed by Mark Fraser, Neeraj Rohilla or David Piper is a greater motivator than hitting a targeted time.   By the end of Mile 4, my pace had slowed and hitting my goal seemed to be fading.    But it was  helpful that I was familiar with the course. As we approached City Park, I noticed I was passing some runners and was able pick up my pace slightly.   Somehow I had enough of a surge during the last half mile to exceed my goal by a few seconds.  But, it was really hard!  10Ks are really hard!!
Back to race organization.   What the organizers lack in pre-race planning and execution, they more than make it up to the runners with the post-race party.  There is nothing like it.  Live band, free flowing beer, homemade jambalaya, along with multiple food booths with smoothies, chips, fruits, energy bars, etc.  Our group stayed three hours at the post-race party. I have sunburned shoulders to prove it.    The post-race party is a perfect reward to all of us who maintained our patience through the entry and package pick-up process, the starting line logistics and the race itself.    I plan to be back next year.
Posted by Bob Brown at 9:18 PM